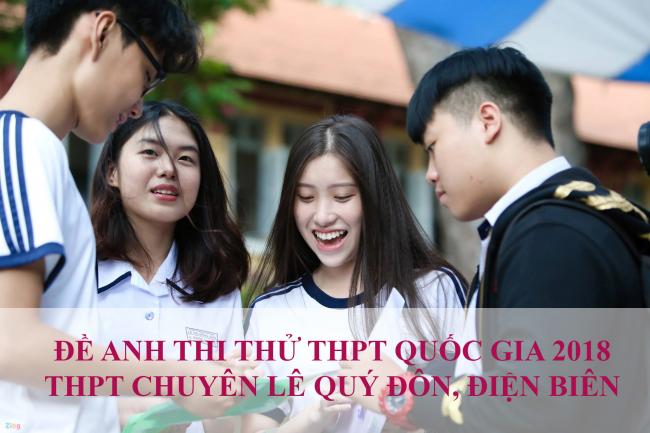 Mark the letter A, B, C or D on your answer sheet to indicate the word whose underlined part differs from the other three in pronunciation in each of the following questions.

Mark the letter A, B, C or D on your answer sheet to indicate the word that differs from the other three in the position of primary stress in each of the following questions.

Mark the letter A, B, C or D on your answer sheet to indicate the word(s) CLOSEST in meaning to the underlined word(s) in each of the following questions.

Question 5. I am gripped with a fever whenever a new year is coming.

Question 6. It was relatively easy for him to learn baseball because he had been a cricket player.

Mark the letter A, B, C or D on your answer sheet to indicate the word(s) OPPOSITE in meaning to the underlined word(s) in each of the following questions.

Question 7. The presentation by Dr. Dineen was self-explanatory.

Question 8. She gave an impeccable reading of the sonata and had the audience on their feet.

Mark the letter A, B, C or D on your answer sheet  to  indicate  the  most  suitable  response to complete each of the following exchanges.

Question 9. Hoa is asking Hai, who is sitting at a corner of the room, seeming too shy.

Mark the letter A, B, C or  D  in  your  answer  sheet  to  indicate  the  underlined  part  that needs correction in each of the following questions.

Question 11. Dams are used to control flooding, provide water for irrigation, and generating electricity for the surrounding area.

Question 12. Weather and geography conditions may determine the type of transportation used in a region.

Question 13. Geothermal energy is energy to obtain by using heat from the Earth’s interior.

Question 14. The more tired you are, the least hard you concentrate.

Mark the letter A, B, C or D on your answer sheet  to  indicate  the  sentence  that  is closest in meaning to each of the following questions.

Question 15. If I hadn’t had so much work to do, I would have gone to the movies.

Question 16. It is an undeniable fact that children watch too much TV.

Question 17. You usually drive fast. You use more petrol than usual.

Question 18. The agreement ended six-month negotiation. It was signed yesterday.

Question 21. Fax transmission has now become a cheap and___way to transmit texts and graphics over distance.

Question 23. That carcinogenic substances _____ in many common household items is well-known.

Question 25. I like doing___such as cooking, washing and cleaning the house.

Question 26. Unfortunately, some really ill animals have to be____by our center.

Question 28. “Did the minister approve the building plans?”
“Not really. He turned them down____that the costs were too high.”

Question 29. Failing to submit the proposal on time was____for Tom.

Question  30.  They always kept on good___with their next-door neighbors for the children’s sake.

American folk music originated with (31)___people at a time when the rural population was isolated and music was  not  (32)____spread by radio, records, or music  video. It was (33) ____by oral traditional and is noted for its energy, humor, and emotional impact. The major source of early American folk songs was music from the British Isles, but songs from Africa as songs of the American Indians have significant part in its heritage. Later settler from other countries also contributed songs. In the nineteenth century, composer Steven Foster wrote some of the most enduringly popular of all American songs, (34) ____ soon became part of the folk tradition. Beginning in the 1930s, Woody Guthrie gained great popularity by adapting melodies and lyrics and supplying new ones as well. In the 1950s and 1960s, singer – composers such as Peter Seeger, Bob Dylan, Joan Baez continued this tradition by urban’ folk music. Many of these songs deal (35)  _____ important social issue, such as racial integration and the war in Vietnam.

Read the following passage and mark the letter A, B, C, or D on your answer sheet to indicate the correct answer to each of the questions.

One of the seven wonders of the ancient world, the Great Pyramid of Giza was a monument of wisdom and prophecy built as a tomb for Pharaoh Cheops in 2720 B.C. Despite its antiquity, certain aspects of its construction makes it one of the truly wonders of the world. The thirteen- acre structure near the Nile river is a solid mass of stone blocks covered with limestone. Inside are the number of hidden passageways and the burial chamber of the Pharaoh. It is the largest single structure in the world. The four sides of the pyramid are aligned almost exactly on true north, south, east and west-an incredible engineering feat. The ancient Egyptians were sun worshippers and great astronomers, so computations for the Great Pyramid were based on astronomical observations.

Explorations and detailed examinations of the base of the structure reveal many intersecting lines. Further scientific study indicates that these represent a type of timeline of events – past, present and future. Many of the events have been interpreted and found to coincide with known facts of the past. Others are prophesied for future generations and are currently under investigation. Many believe that pyramids have supernatural powers and this one is no exception. Some researchers even associate it with extraterrestrial beings of ancient past.

Was this superstructure made by ordinary beings, or one built by a race far superior to any known today?

Question 36. In the second passage, the word ‘prophesied’ is closest in meaning to .

Question 37. On what did the ancient Egyptians base their calculations?

Question 38. What was the most probable reason for providing so many hidden passages?

A.    To allow the weight of the pyramid to settle evenly.
B.    To permit the high priests to pray at night.
C.    To keep grave robbers from finding the tomb and the treasure buried with the Pharaoh.
D.    To enable the Pharaoh’s family to bring food for his journey to the afterlife

Question 39. The word ‘feat’ in the first paragraph is closet in meaning to .

Question 40. What is the best title for the passage?

Question 41. Why is the Great Pyramid of Giza considered one of the seven wonders of the world?

A.    It was built by a super race.
B.    It is perfectly aligned with the four cardinal points of the compass and contains many prophecies.
C.    It was selected of the tomb of Pharaoh Cheops.
D.    It was very old.

Question 42. What has research of the base revealed?

A.    There are cracks in the foundation
B.    Tomb robbers have stolen the Pharaoh’s body
C.    A superior race of people built in
D.    The lines represent important events

Read the following passage and mark the letter A, B, C, or D on your answer sheet to indicate the correct answer to each of the questions.

Overpopulation, the situation of having large numbers of people with too few resources and too little space, is closely associated with poverty. It can result from high population density, or from low amounts of resources, or from both. Excessively high population densities put stress on available resources. Only a certain number of people can be supported on a given area of land, and that number depends on how much food and other resources the land can provide. In countries where people live primarily by means of simple farming, gardening, herding, hunting, and gathering, even large areas of land can support only small numbers of people because these labor-intensive subsistence activities produce only small amounts of food.

In developed countries such as the United States, Japan, and the countries of Western Europe, overpopulation generally is not considered a major cause of poverty. These countries produce large quantities of food through mechanized farming, which depends on commercial fertilizers, large-scale irrigation, and agricultural machinery. This form of production provides enough food to support the high densities of people in metropolitan areas.

A country’s level of poverty can depend greatly on its mix of population density and agricultural productivity. Bangladesh, for example, has one of the world’s highest population densities, with 1,147 persons per sq km. A large majority of the people of Bangladesh engage in low-productivity manual farming, which contributes to the country’s extremely high level of poverty. Some of the smaller countries in Western Europe, such as the Netherlands and Belgium, have high population densities as well. These countries practice mechanized farming and are involved in high-tech industries, however, and therefore have high standards of living.

At the other end of the spectrum, many countries in sub-Saharan Africa have  population densities of less than 30 persons per sq km. Many people in these countries practice manual subsistence farming; these countries also have infertile land, and lack the economic resources and technology to boost productivity. As a consequence, these nations are very poor. The United States has both relatively low population density and high agricultural productivity; it is one of the world’s wealthiest nations.

High birth rates contribute to overpopulation in many developing countries. Children are assets to many poor families because they provide labor, usually for farming. Cultural norms in traditionally rural societies commonly sanction the value of large families. Also, the governments of developing countries often provide little or no support, financial or political, for family planning; even people who wish to keep their families small have difficulty doing so. For all these reasons, developing countries tend to have high rates of population growth.

Question 43. Which of the following is a contributor to overpopulation in many developing countries?

Question 46. Which of the following could be the best title for the passage?

Question 48. In certain countries, large areas of land can only yield small amounts of food because     .

Question 49. Which of the following is TRUE, according to the passage?

A.    There is no connection between a country’s culture and overpopulation.
B.    In certain developed countries, mechanized farming is applied.
C.    All small countries in Western Europe have high population densities.
D.    In sub-Saharan African countries, productivity is boosted by technology. 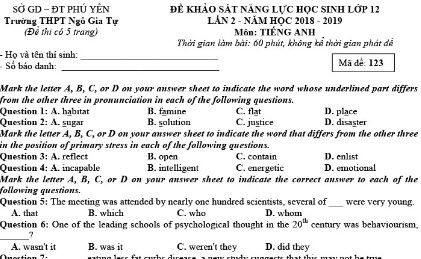 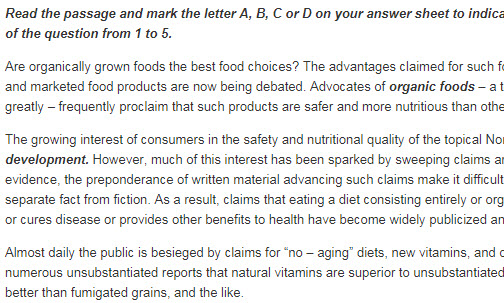 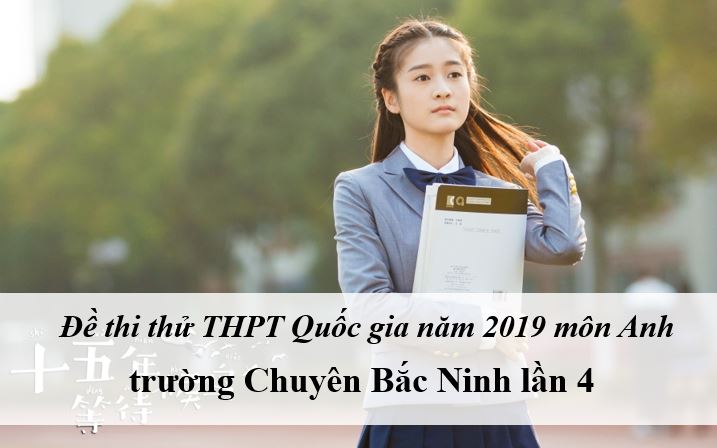