Write the letter A, B, C, or D on your answer sheet to indicate the correct answer to each of the following questions.

4. Mai speaks English ____ after she lived in England for several months.

5. The weather was very nice, ____ we decided to have dinner in the garden.

8. If we go on littering, the environment ____ extremely polluted.

9. Choose the word which is opposite in meaning to the underlined word in the following sentence:

A young pilot and his plane disappeared after sighting a UFO.

10. English is such a(n) ____ language that learning it well brings students great advantages.

11. Mindy: I think we should put the garbage bins around the schoolyard.

D. All are correct.

12. To the one ____ feelings for me are so strong that the word love can't describe them.

Write the letter A, B, C, or D on your answer sheet to indicate the word whose underlined part differs from the other three in pronunciation in each of the following questions.

Write the letter A, B, C, or D on your answer sheet to indicate the word that differs from the other three in the position of primary stress in each of the following questions.

Put the following sentences in the correct order to make a complete dialogue. By the number, write letter A, B, C, D, E, F, G on your answer sheet.

Put the interchange given in the box into the correct positions in the conversation below. There is ONE EXTRA ANSWER. By the number, write letter A, B, C or Don your answer sheet.

B. What else would you do?

C. Don't forget that it is very cold in Da Lat in January.

D. What would you do if you could go to Da Lat?

E. How are you going to travel to Da Lat?

Andy: I wish I could go to Da Lat.

Andy: I don't mind, I have lots of warm clothes.

Andy: I would go to the night market and the Zoodoo.

Andy: I would go to a mountain top and admire the view.

Read the following passage and write the letter A, B, C, or D on vour answer sheet to indicate the correct word or phrase that best fits each of the numbered blanks.

Read the following passage and write the letter A, B, C, or D on your answer sheet to indicate the correct answer to each of the questions.

Christmas is the most important annual festival in both Britain and North America. In its origins, it combines the Christian celebration of the birth of Christ, on 25 December, with the ancient tradition of a winter feast during the darkest period of the year.

On Christmas day itself, there is usually a celebration with family and friends, which includes a special Christmas meal of roast goose or turkey followed by Christmas pudding which is soaked in brandy and set alight. The table is specially decorated, usually with Christmas crackers, 'containing paper hats, riddles and other novelties. Port and nuts are often served after the meal. Other Christmas foods are mince pies and a special Christmas cake, a fruit-cake covered in marzipan and icing. Many people listen to the message broadcast by the Queen to people in Britain and the Commonwealth on Christmas day. The following day is called Boxing Day. It was formally the day when servants were given their "Christmas box”, a gift or money from their employer. Many households still give Christmas boxes to the people who deliver their post, milk, newspapers, etc.

36. The word "feast" is closest in meaning to

A. a giant monster

B. a special meal

37. In its origin, Christmas is held to celebrate_

A. the birth of Christ

B. the ancient tradition of a winter feast

38. On Christmas day, the table is usually decorated with

A. port and nuts

39. On Christmas Day, who delivers the message to people in Britain and the Commonwealth?

B. On Christmas Eve

Rewrite the sentences, beginning as shown, so that the meanings stay the same. By the number, write complete sentences on your answer sheet.

41. She behaves badly, so everyone hates her.

42. Mr. Minh was very tired, but he tried to finish the work.

43. He can't buy a bike because he doesn't have enough money.

45. I think we should use energy-saving bulbs.

Solar energy is important to our lives nowadays. Write a paragraph within 70-80 on your answer sheet about the benefits of solar energy. You can use these cues or your own ideas.

- be a completely renewable resource

- be the cleanest, the cheapest and the most effective energy up to now

- not release harmful gas into the atmosphere

- reduce electricity bill and save money and the environment.

41. she behaves badly, everyone hates her.

42. was very tired, he tried to finish the work. 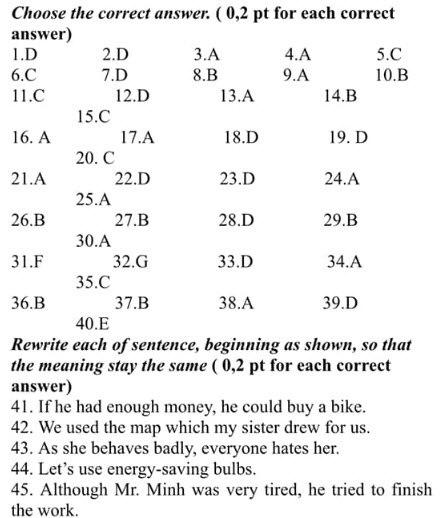 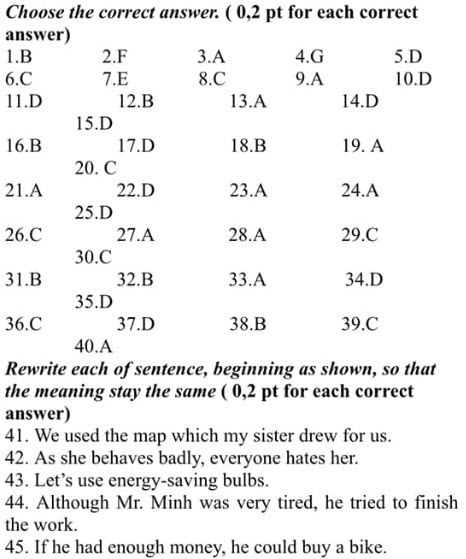 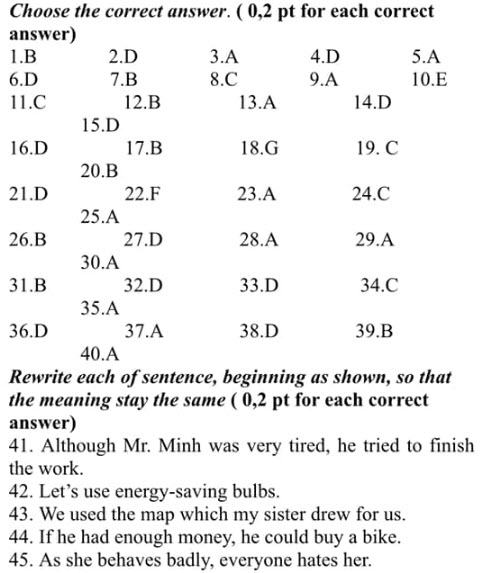